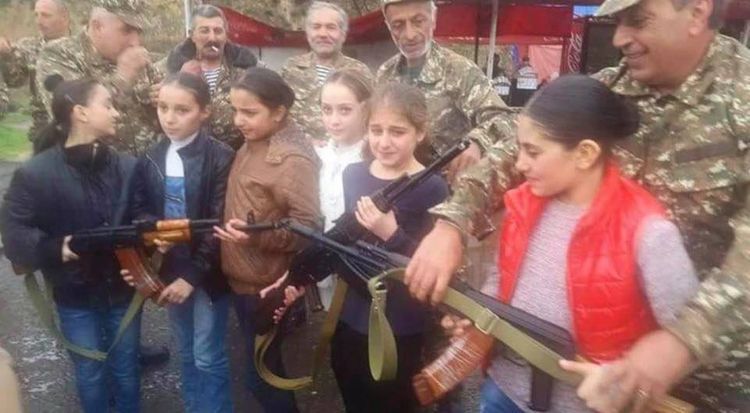 The non-government organizations (NGOs) in Azerbaijan have addressed an appeal to the Executive Director of UNICEF Ms Henrietta H. Fore, Chairman of the Board of Save the Children International organization Mr. Robert Good, President of the International Bureau for Children's Rights Mr. Theophane Nikyema, President of SOS Children's Villages International Mr. Siddhartha Kaul, Executive Director of the Child Protection Fund Ms. Bharti Wahi, and the President of the Global Fund for Children Mr. John Hecklinger regarding the use of children under the age of 15 by Armenia in military operations, APA reports.

“We, as NGOs defending children's rights in Azerbaijan, appeal to you with great concern.

We would like to inform you that as a result of the military aggression launched by Armenia against Azerbaijan on September 27, the situation in the region has reached a very tense level and military operations have been resumed. As a result of a series of missile attacks by the armed forces of Armenia on cities and districts of Azerbaijan, 65 civilians, including 10 children, were killed and more than 300 were injured. Unfortunately, Armenia still commits war crimes.

The political-military leadership of Armenia, which grossly violates all the norms and principles of international law, is now committing another crime and involving children under the age of 15 in its military operations against Azerbaijan. You can watch a video of a child involved in military operations through the following link (https://youtu.be/e12mWOJPySM).

We would like to note that Armenia, by involving the children under the age of 15 to the military operations, violates not only the relevant provisions of the 1949 Geneva Conventions, but also Article 38 of the Convention on the Rights of the Child, adopted at the 44th session of the UN General Assembly on November 20, 1989. The Convention calls on the participating States to adhere strictly to international humanitarian law relating to children in armed conflicts, in particular to prohibit the direct participation of persons under the age of 15 in hostilities and to take all appropriate measures to ensure the implementation of these demands.

However, Armenia's blatant involvement of children in military operations shows once again that the occupant country does not respect the principles of international law and ignores its international obligations.

Therefore, we, the NGOs protecting the children's rights, call on you to properly assess the actions of Armenia in violation of international law and ensure its refraining from involving children in hostilities.”

The appeal was signed by 44 NGOs.