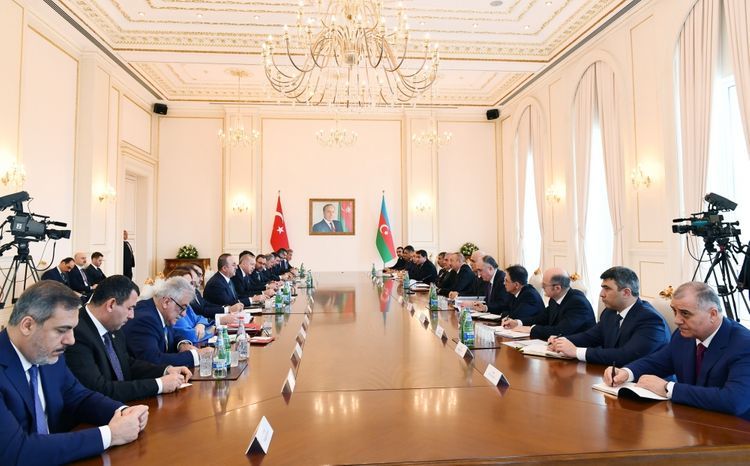 The heads of state addressed the meeting.

Last year was a successful one for our ties. We met several times. Huge success was achieved in all areas – political, economic, energy, transport. Among them, of course, we can mention the TANAP project reaching the border with Europe.

In a word, I am sure that the regular meeting of the Azerbaijan-Turkey Strategic Cooperation Council being held today will be very important for the further development of our ties. There are many issues on the agenda. Their discussion and the decisions to be made, as well as the bilateral documents to be signed, will significantly strengthen our ties.

Welcome again! I wish you and the delegation, the fraternal Turkish people success, the best of luck and good health!

- I would also like to express our deep appreciation to the distinguished Mr. President, my dear brother for the hospitality extended both to me personally and the delegation from the moment we arrived. During our one-on-one meeting, we had the opportunity to discuss Turkish-Azerbaijani relations in detail. We discussed in detail everything we can do and what has been done in all areas – political, military, economic, commercial, cultural. I also want to emphasize that we are pleased to chair such a meeting – the eighth meeting of the Council.

During the meetings today, our ministers will hold the necessary discussions.

Last year, my brother Mr. Aliyev explicitly defined his opinion, saying: “Nagorno-Karabakh is Azerbaijan and exclamation mark.” Turkey supports these words, and I repeat them here. I hope the results of the 9 February elections to the Milli Majlis benefit our Azerbaijan. We are very pleased and happy that the elections ended in an atmosphere of stability and tranquility.

We also observe with approval the process of reforms being implemented under the guidance of my esteemed brother Mr. Aliyev. I want to express my readiness to share with you our experience in all areas to support the reform process.

We have implemented such gigantic projects together as the Baku-Tbilisi-Kars railway, TANAP, the Star Oil Refinery. At present, our main goal is to increase our trade of $4.5 billion to $15 billion, as we outlined in 2019. My brother and I have reached agreement on this issue.

The eighth meeting of the Azerbaijan-Turkey High-Level Strategic Cooperation Council has been held in Baku, APA reports.