President Ilham Aliyev: What we are doing on the ground demonstrate that our army is capable to liberate its lands itself 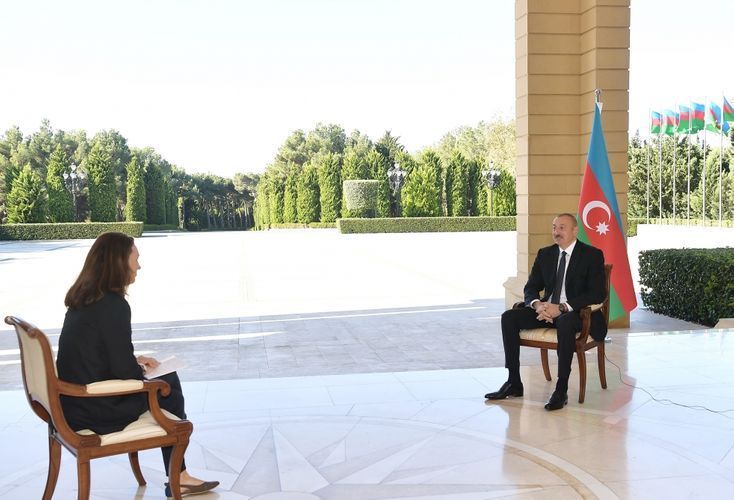 "We are receiving the some contradictory statements and messages from the very beginning of the outbreak. But I think that due to our mutual diplomatic efforts we managed to keep the situation under control. As you know, I received several phone calls from president Macron. And our last conversation was very positive", Azerbaijani President Ilham Aliyev said in an interview with France 24 TV channel on October 14, APA reports.

Azerbaijani President said that we committed to our efforts to find a political solution to the conflict: "I was informed that France as a co-chair will remain neutral, because that’s the mandate for a co-chair. This morning I was informed that the French foreign minister issued a statement that due to the fact that France is a co-chair of the Minsk Group it must be neutral. We fully support this position and our position always was that all the co-chairs must be neutral. They should not take sides, because it’s contradicting their mandate. In a national capacity, every country has allies friends, with some countries more active relations, with some countries less active relations. This is normal and no one is objecting that. But if some countries have a mandate to be a mediator, of course, both sides, I am sure, Armenia and Azerbaijan expects neutrality, and we see this neutrality now. Therefore, I think the issue which you are referring to now is over. So, we have closed that page."

President Ilham Aliyev said while answering the question that “In previous interviews you’ve called for an apology from Emmanuel Macron, after his remarks saying that 300 fighters from Syria have been brought to fight for your side. When you last spoke to him, did you speak about this issue-him accusing mercenaries are fighting for your side?” that we spoke about that and I was still waiting for evidence: "No evidence was presented to me. No evidence was presented to our other officials. I asked the French president to give evidence and to organize contacts between the heads of corresponding state units in order to talk, in order to exchange this information and this contact happened. And I can tell you that no evidence was presented to us. Therefore, if there is no evidence, I think these rumors should also be left back in the history. We don’t have mercenaries. This is our official statement. Since the outbreak, already more than two weeks passed, not a single country presented us a single evidence of that. Moreover, we don’t need that. We have an army of more than 100 thousand fighters. And what we are doing now on the ground demonstrate that our army is capable to liberate its lands itself."