President Ilham Aliyev: We are concerned about the format of trilateral military cooperation involving Armenia, Greece and Cyprus 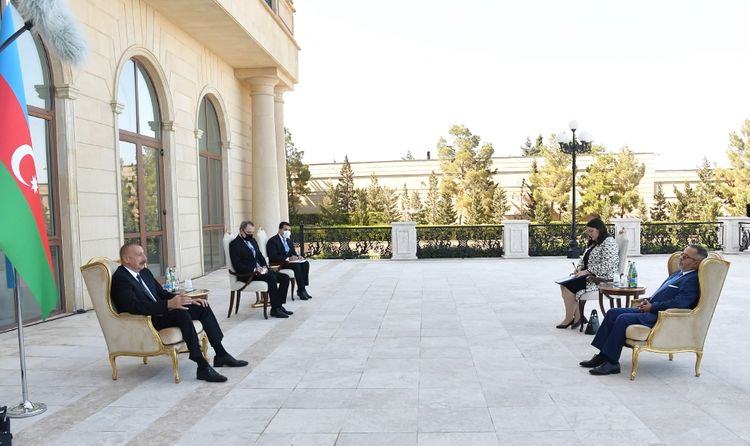 As reported earlier, President of the Republic of Azerbaijan Ilham Aliyev has today accepted credentials of the newly appointed Ambassador Extraordinary and Plenipotentiary of Greece to Azerbaijan Nikolaos Piperigos, said President Ilham Aliyev.

“The second issue I want to raise with you, so that you hear it not from other sources but from me personally, is our concern about military cooperation involving Armenia, Greece and Cyprus. As you know, Armenia is a country that has occupied our territories. It has committed an act of genocide in Khojaly, expelled one million Azerbaijanis from their homes, destroyed our historical, cultural and religious monuments, implemented a policy of ethnic cleansing in the occupied territories, is violating international law and does not comply with the resolutions of the UN Security Council and other organizations.”

“Armenia is acting aggressively. The latest tensions on the state border are a provocation by Armenia. An Armenian officer was recently detained while trying to cross the line of contact in an attempt to commit a terrorist act, and he has already admitted that his group intended to attack our servicemen and civilians. In short, Armenia is the enemy of Azerbaijan, and this was their decision.”

“Of course, Armenia's close military cooperation with any country is a matter of concern for us. You are probably aware of our reaction to the intense supply of weaponry from Russia to Armenia immediately after Armenia’s provocation on the border. Active clashes were suspended on 16 July, and from 17 July until yesterday – yesterday was the last flight – there were numerous cargo flights from Russia to Armenia through the airspace of Caspian littoral states. I am saying this to you for a reason. We have also raised this issue with our Russian partners, and we are concerned about military cooperation with Armenia. This poses a major threat to Azerbaijan because they are using these weapons to kill our servicemen and civilians.”

“We are concerned about this tripartite format of cooperation. Of course, every country does what it thinks is right. Therefore, we are not in a position to block or prevent it in any way. But I think that it would be good if you hear from me that this is an issue that worries us, and I have explained why it happened.”