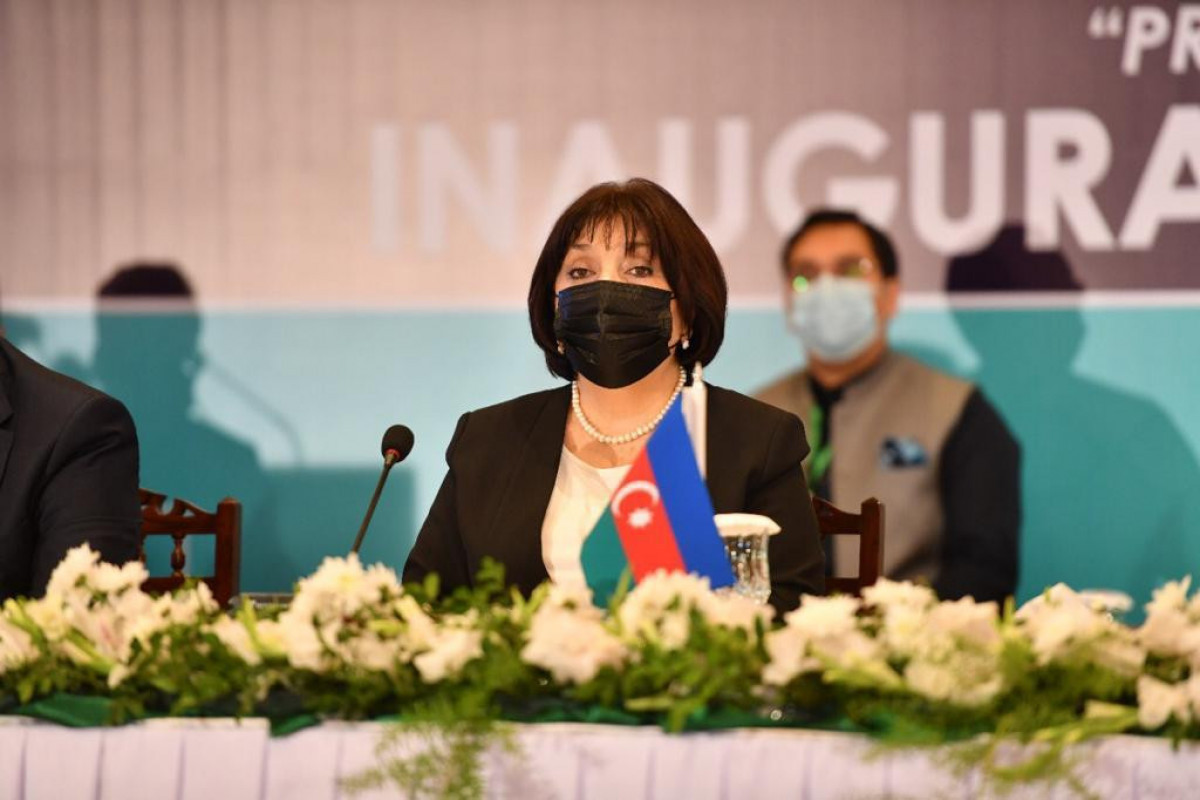 As part of her current visit to the Islamic Republic of Pakistan, Chair of the Milli Majlis Sahiba Gafarova spoke at the opening event of the 2nd General Conference of the Parliamentary Assembly of the Economic Co-operation Organisation on 1 June, Press and Public Relations Department of the Milli Majlis  told APA.

The hard times are being lived through, according to the Chair of the Milli Majlis. The world community is facing severe hazards such as terrorism, organized crimes, human and drug trafficking, issues of refugees and IDPs, poverty, climate change, natural disasters, and epidemics. The issue of COVID-19 proved an unexpected exam for the international community which had to mobilise against this pandemic. Azerbaijan was among the first countries mobilising global efforts against COVID-19. President of Azerbaijan initiated the Summit of the Turkic Council, the Summit of the Non-Aligned Movement and the UN General Assembly Special Session at the level of the heads of state and government last year. These initiatives once again demonstrated Azerbaijan’s commitment to international solidarity and co-operation.

We should all find more efficient and rational approaches to responding to such challenges arising before the global community as they increase in severity. Parliaments play a material role in this regard through their all-encompassing co-operation; it is important for the humankind that interparliamentary co-operation should become deeper.

‘In this sense, the Economic Co-operation Organization is an umbrella bringing countries of geopolitically important regions together. So, strengthening of integration processes between us will allow more efficient use of the rich natural resources, transport opportunities and intellectual potential of these regions. It will also promote peace, stability, security, dialogue and progress, and form our common position on modern challenges.’

The Chair of the Milli Majlis emphasised the immense attention Azerbaijan has always paid to the collaboration within the frameworks of the Economic Co-operation Organisation. About 3 months ago, on 4 of March, she said, the Charter of ECO Research Centre, initiative which came from the late President of Azerbaijan Heydar Aliyev, was signed. Azerbaijan will host and do its utmost for the effective functioning of the Centre.

Having remarked the dedication of our country to integration and a combined endeavour to carry regional and global projects into life, Sahiba Gafarova added that although Azerbaijan had been facing, throughout almost 30 years, the Armenian occupation, still it had managed to achieve in realisation of successful regional projects. Azerbaijan has become an important partner in providing energy security and energy routes diversification in Eurasia. Baku-Tbilisi-Ceyhan main oil export pipeline and Baku-Tbilisi-Erzurum gas pipeline should be noted in this regard. Another important project that commissioned on December 31, 2020, was the Southern Gas Corridor. 3500 km long Southern Gas Corridor which is connecting 7 countries is one of the biggest energy infrastructure projects in the world. Such a huge success could be obtained by building an exemplary integration between the countries. And Azerbaijan could build this integration successfully. Worthy to underline that Azerbaijan could do this while the Republic of Armenia with its occupant policy was hindering the process.

The occupation is no more. Last year, Azerbaijan by its military-political means put an end to nearly 30 years of occupation by Armenia. Unfortunately, the UN Security Council resolutions demanding immediate, full and unconditional withdrawal of Armenian troops from occupied territories of Azerbaijan remained on paper for 3 decades. Finally, Azerbaijan ensured the implementation of the UN resolutions and restored its territorial integrity. In the 44-day Patriotic War, Azerbaijan fully liberated ancient Azerbaijani lands of Karabakh and forced Armenia to sign an act of capitulation on 10 November 2020.

‘The first country which politically and morally supported Azerbaijan during the war was the brotherly Turkey. On the first and second days of the war brotherly Pakistan and Afghanistan expressed their support to territorial integrity of Azerbaijan calling Armenia to put an end to its occupation. I express my deep gratitude to them for their support. I also use this opportunity to thank on behalf of the Parliament of Azerbaijan to those countries which supported us in our war of just,’ Speaker Sahiba Gafarova continued.

The trilateral statement of the leaders of Azerbaijan, Armenia and Russia on November 10, 2020 clearly reflects the restoration of all economic and transport ties in our region. Armenia must honour its obligation to guarantee the security of transport links in the region. In this context, the new connectivity corridor which will pass through historic Azerbaijani land of Zangazur and link mainland Azerbaijan with its inseparable part Nakhchivan Autonomous Republic and Turkey. This is the “Zangazur corridor” which will create new opportunities in the transportation sector in the region.

‘Azerbaijan is part of the regional connectivity projects. By its participation in and contribution to the East-West, North-South, North-West transportation corridors, the Republic of Azerbaijan has become one of Eurasia's main and reliable transportation and logistics hubs. Azerbaijan has already connected its internal transport infrastructure with Lapis-Lazuli transport corridor. And now having the “Zangazur corridor” realized, we are creating broader opportunities for multilateral co-operation,’ Mrs Gafarova continued.

After ending the Armenian occupation, Azerbaijan has launched large-scale programs to restore the liberated territories. There is a lot to be done in this area. Unfortunately, Armenian vandals have destroyed our occupied cities and villages, our historical and cultural monuments, and looted our national treasures. The infrastructure in those areas has been completely destroyed. Companies from a number of countries, primarily those friendly to Azerbaijan, are involved in the reconstruction works. There is no doubt that the participation of the member countries of the Economic Co-operation Organization in this process is of significant importance as well, according to Sahiba Gafarova.

Finishing her speech, the Chair of the Milli Majlis reiterated the significant role that the parliamentary diplomacy can play in strengthening regional integration and said that rapprochement of parliaments brings countries closer. Parliamentary diplomacy has already proven to be a democratic form of dialogue between states and peoples and an effective means of co-operation.

The Chair of the Milli Majlis expressed a confidence that the dialoguing format afforded by the Parliamentary Assembly of the Economic Co-operation Organisation was going to generate favourable conditions for the concerned nations and states and would make a contribution of its own to the strengthening of the inter-state friendship and the states’ co-operation. Then, Mrs Gafarova wished the conference success.