President Ilham Aliyev: Any military expert can see that the Azerbaijani Army today has beaten Armenia on the battlefield 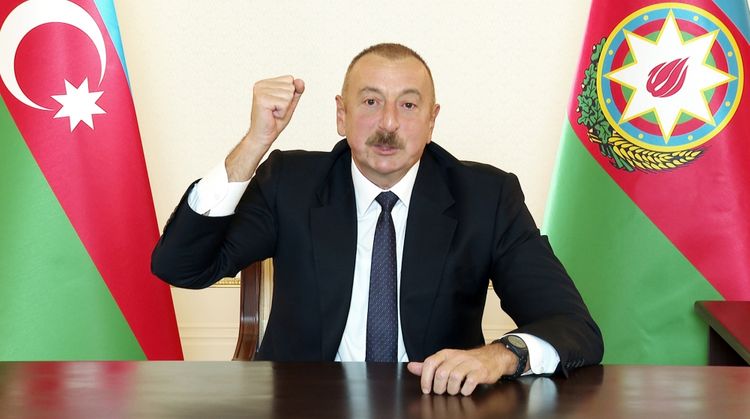 “The enemy tells tales and lies to his people. They falsify facts, want to deceive their own people, want to deceive the international community saying that they are allegedly attacking us, that they have taken back some of our positions. This is a lie. There is an objective observation of the battles, and any military expert can see that the Azerbaijani Army today has beaten Armenia on the battlefield,” said President of Azerbaijan Ilham Aliyev as he addressed the nation, APA reports.

“The Azerbaijani Army is showing its superiority. Azerbaijani soldiers and officers are showing high moral and psychological qualities, showing high spirits. Because we are fighting on our own land, we are liberating our own lands. Armenian soldiers are occupiers. The land where the battles are going on is not theirs. They are abandoning their positions and running away. However, several layers of a deeply echeloned defense system were established along the line of contact over the past 30 years. Engineering and fortification facilities were built. It is very difficult to break them, to cross them. In some cases, we needed a few days to break through some fortifications. At the same time, we are doing everything to minimize losses. Therefore, in some cases, we strengthened our positions in various directions and then prepared for a new operation so that there is a maximum result and minimum loss,” President Ilham Aliyev said.