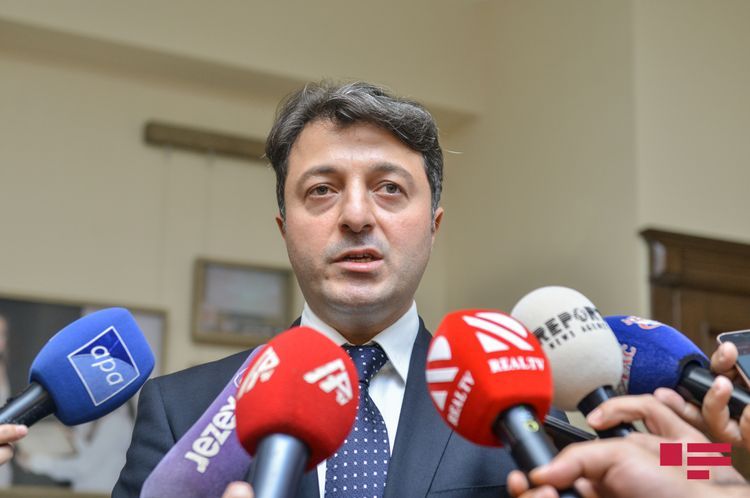 The Chairman of the Azerbaijani community of the Nagorno Garabagh region of the Republic of Azerbaijan, Tural Ganjaliyev, commented on the statement by the Armenian Foreign Ministry.

Mr Ganjaliyev said negotiations have been held between Azerbaijani and Armenian Foreign Ministers with the mediation of the OSCE Minsk Group, recently.

“Immediately following the meeting, the spokesperson of Armenian MFA Anna Naghdalyan tried to overshadow the negotiations by voicing a provocative opinion that "selected representatives of Artsakh people" may be involved in the peace process. I emphasize with regret that the Armenian side always impedes the peaceful settlement of the conflict using such provocative methods in the sensitive moments of the negotiations. A notion such as "people of Artsakh" does not exist. Armenians who live in Nagorno Garabagh are part of Azerbaijani people and they are citizens of Azerbaijan.

Although the notion of “Artsakh people” which has no basis, is repeatedly clarified, Armenia shows its unconstructive position by raising this issue every time and does not refrain to become an object of censure by the world community.

The neatest respond to Armenia’s ruling bodies was given by President of the Republic of Azerbaijan Ilham Aliyev last year in the session of the Valdai International Club, held in Sochi and declared that there is not a notion of “Nagorno Garabagh people”, but there is a notion of “population of Nagorno Garabagh. We witnessed a reiteration of the position that the population of Nagorno Garabagh consists of equal Azerbaijani and Armenian communities, which was reflected in the statements of the OSCE Minsk Group co-chairs last year and in the statement of Russian Foreign Minister Sergei Lavrov during his last visit to Baku.

The issue has been determined in the document of OSCE (former CSCE) Helsinki Ministerial Council, dated March 24, 1992.

Groundless statements of Armenian officials will not be able to prevent the co-existence of Azerbaijani and Armenian Communities of Nagorno Garabagh within internationally-recognized borders of Azerbaijan. We will return to our lands, restore our violated rights and destructed properties”, he noted.