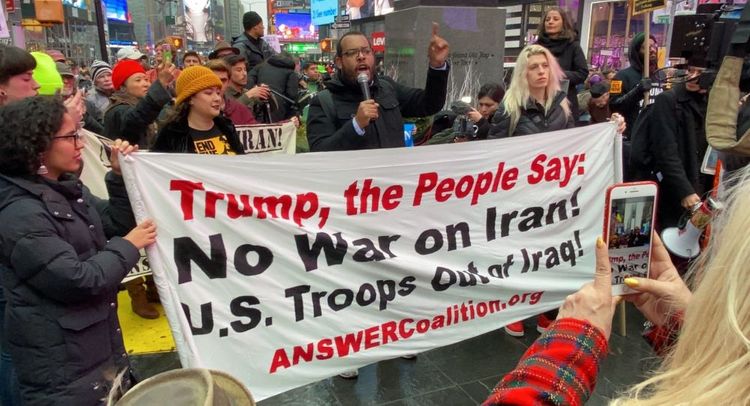 Groups of protesters took to the streets in Washington and other U.S. cities on Saturday to condemn the air strike in Iraq ordered by President Donald Trump that killed Iranian military commander Qassem Soleimani and Trump’s decision to send about 3,000 more troops to the Middle East, APA reports citing Sputnik.

“No justice, no peace. U.S. out of the Middle East,” hundreds of demonstrators chanted outside the White House before marching to the Trump International Hotel a few blocks away.

Similar protests were held in New York, Chicago and other cities. Organizers at Code Pink, a women-led anti-war group, said protests were scheduled on Saturday in numerous U.S. cities and towns.

Protesters in Washington held signs that read “No war or sanctions on Iran!” and “U.S. troops out of Iraq!”

Speakers at the Washington event included actress and activist Jane Fonda, who last year was arrested at a climate change protest on the steps of the U.S. Capitol.

“The younger people here should know that all of the wars fought since you were born have been fought over oil,” Fonda, 82, told the crowd, adding that “we can’t anymore lose lives and kill people and ruin an environment because of oil.”

“Going to a march doesn’t do a lot, but at least I can come out and say something: that I’m opposed to this stuff,” said protestor Steve Lane of Bethesda, Maryland. “And maybe if enough people do the same thing, he (Trump) will listen.”