President of Azerbaijan: "Don't these three countries have enough opportunities to show the aggressor its place? They didn't want it" 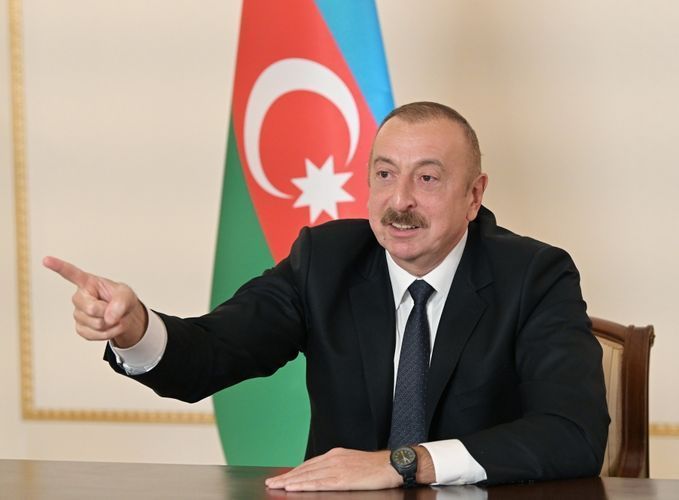 "In 1992, the OSCE Minsk Group was created. The activities of the Minsk Group are evident," President of Azerbaijan Ilham Aliyev said this in his address to the nation today, APA reports.

The head of state noted that the co-chair countries of the Minsk Group (MG), after a certain period of time, actually concentrated all powers in their hands, in fact, monopolizing this issue: "In fact, MG was paralyzed as a group and three countries began to tackle this issue. But was this the result? Was not, was not for us! Was for Armenia. Armenia wanted this result. It wanted to constantly conduct negotiations and constantly deceive us, to freeze this issue, so that our land would remain under occupation forever! What are the activities of the Minsk Group? Was it able to put pressure on the occupier? No! Did it want to put pressure? No! I have repeatedly raised the issue before them, if you want to see the settlement of the issue, impose sanctions on Armenia, it is in your hands. You are members of the UN Security Council, you can resolve any issue.

In particular, the officials of these countries say that their positions on this issue coincide. This is also an interesting question. How is it that their interests in all other issues - in the issue of nuclear weapons, the situation in the Middle East, the situation in Asia, Europe - contradict each other? And on what issue do their interests coincide? Not one at a time, only on the issue of Nagorno-Karabakh. Why? Everyone understands. Because this frozen situation suits everyone except us. Naturally, these countries, and first of all Armenia."

President Ilham Aliyev noted that Armenia is carrying out an illegal settlement of the occupied lands: "Does someone say anything to them? Nobody says anything! This is a crime, an international crime, it is contrary to the Geneva Conventions. Nobody tells them why they are carrying out illegal settlement, and demonstratively, bringing Armenians from Arab countries and placing them, including in Shusha. Nobody says anything. What does this mean? This suggests that go on, bring as much as you want, Armenianize these lands, destroy the cultural heritage of Azerbaijan! The bottom line was this. Otherwise, don't these three countries have enough opportunities to show the aggressor in his place? They didn't want it."