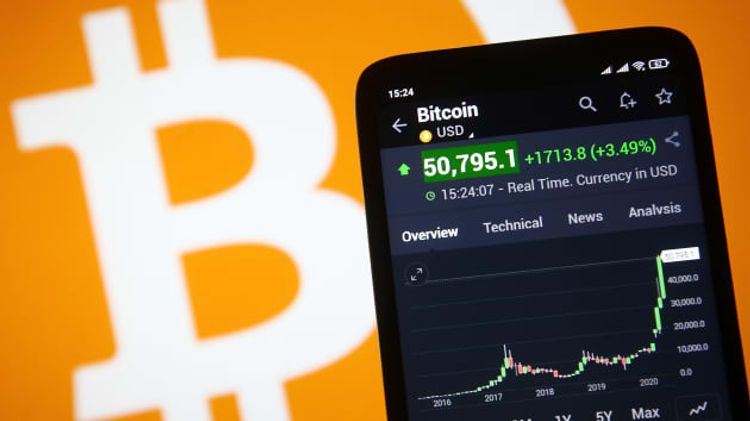 Just after midday London time, the price of the world’s most valuable digital currency climbed 8% to $53,544 a coin, according to data from Coin Metrics. Two smaller digital tokens, ether and XRP, rose 10% and 12% respectively.

Last week, bitcoin slumped below $50,000 for the first time since early March after a proposed capital gains tax hike from U.S. President Joe Biden led to a wave of selling. The entire crypto market shed more than $200 billion of value in a single day.

Biden is expected to raise the long-term capital gains tax for the wealthiest Americans to 43.4%, including a surtax. That triggered a brief dip in stock markets, and analysts said fears over the proposal may have extended to the crypto market.

Bitcoin has risen around 80% since the start of the year as more institutional investors and major companies like Tesla have jumped into the market, believing it to be a portfolio diversifier in the event of rising inflation. It’s down roughly 17% from an all-time high of nearly $65,000, however.

In recent weeks, crypto executives have warned of a potential clampdown on the market from regulators. Several officials, from U.S. Treasury Secretary Janet Yellen to European Central Bank President Christine Lagarde, have sounded the alarm about the use of bitcoin in illegal activities.

In Turkey, the central bank has banned the use of digital assets in payments, while two crypto exchanges have collapsed. The CEO of one of the firms, Thodex, has reportedly fled Turkey with $2 billion in investors’ funds.

Nevertheless, there are signs that crypto is entering the mainstream. Coinbase, the largest digital currency exchange in the U.S., went public in a blockbuster direct listing earlier this month, while PayPal has launched new features for trading crypto as well as using it for shopping.