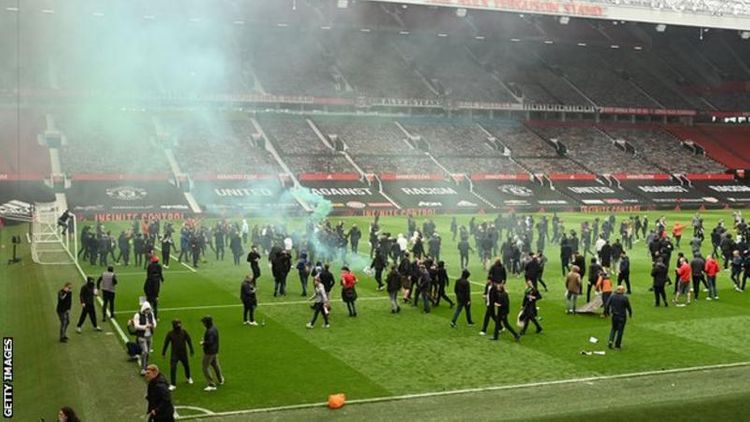 Manchester United's Premier League game against Liverpool was postponed after about 200 fans broke into Old Trafford to protest against the Glazer family's ownership of the club, APA reports citing BBC Sport.

The fixture was scheduled to kick off at 16:30 BST on Sunday.

Police said two officers had been injured during the protests.

It is the first time a Premier League match has been postponed because of fan protests.

Fans had gathered outside the ground and scores of green and gold flares - the colours of United's first shirts when they were formed as Newton Heath in 1878, and of the original anti-Glazer protests in 2010 - were set off at 14:00.

The protests follow United's decision, along with five fellow Premier League clubs, to join the European Super League (ESL) last month, before subsequently all pulling out.

Supporters are currently not allowed into grounds because of the coronavirus pandemic but some United fans got onto the Old Trafford pitch to protest and, even though they were removed, some then made it back onto the grass later on.

"The security and safety of everyone at Old Trafford remains of paramount importance," added the Premier League.

"We understand and respect the strength of feeling but condemn all acts of violence, criminal damage and trespass, especially given the associated Covid-19 breaches.

"We sympathise with the police and stewards who had to deal with a dangerous situation that should have no place in football."

The Football Association will be liaising with United, the Premier League and safety authorities to find out exactly what happened and the reasons for it.

Both clubs had submitted their team line-ups for the hotly anticipated fixture but neither had left their hotels to go to the ground prior to the game being called off at just after 17:35.

United fans had also gathered at the Lowry Hotel where their side's players were staying prior to the match.

Ole Gunnar Solskjaer's side are currently second in the Premier League and a Liverpool win on Sunday would have handed Manchester City the title for the third time in four seasons.

Talks will now take place about re-arranging the game.

Greater Manchester Police (GMP) said "it became clear that many of those present were not intending to exercise their right to peaceful protest" and that "flares were let off and bottles thrown at officers".

They added that protestors getting into the ground meant "some United staff having to lock themselves in rooms".

"Those in the stadium were evicted by officers but outside on the forecourt, hostility grew with bottles and barriers being thrown at officers and horses," said GMP.

"Two officers have been injured with one officer being attacked with a bottle and sustaining a significant slash wound to his face requiring emergency hospital treatment."

GMP assistant chief constable Russ Jackson said: "The behaviour displayed by those at both Old Trafford and the Lowry Hotel was reckless and dangerous.

"We have launched an investigation and we will be working closely alongside partners to ensure we establish the full circumstances surrounding the events and prosecute those responsible."

The chairman of Greater Manchester Police Federation, Stu Berry, said his organisation's thoughts "are with our injured officers" and that it "will be seeking a review of Sunday's operational risk assessment and public order resources" for its members.

"We witnessed appalling scenes - police officers are not punchbags for people protesting for their cause," he said.

"At the end of their shifts, hard-working police officers should be able to go home to their families in one piece. Not be rushed to hospital."

BBC Sport has been told the disorder included serious clashes with police around the entrance to the Munich tunnel, which runs behind the Sir Bobby Charlton Stand at Old Trafford.

"Our fans are passionate about Manchester United, and we completely acknowledge the right to free expression and peaceful protest," said United.

"However, we regret the disruption to the team and actions which put other fans, staff, and the police in danger.

"We thank the police for their support and will assist them in any subsequent investigations."

Liverpool, who were also involved in the failed attempt to join the ESL, said they were in "full agreement" to postpone the game.

"It is our position that public safety must be the number one factor in any such decision, with the ability to provide a secure environment for the participants, staff and officials being a particular priority," said the Anfield club.

"It was clearly not possible for this to be guaranteed due to a situation which escalated rapidly."

Why are the protests taking place?

There has been a long-standing campaign against the Glazer family since the Americans' controversial leveraged takeover of the club in 2005.

Recently, Manchester United boss Ole Gunnar Solskjaer spoke to fans who entered the club's training ground at Carrington to protest against the owners.

In the wake of the European Super League collapsing, United co-chairman Joel Glazer said the club "apologised unreservedly" but the Manchester United Supporters Trust (MUST) said it had "zero trust in the owners".

On the protests before the Liverpool game, MUST said they had been "the culmination of 16 years since the Glazer family's acquisition of the club".

It added: "On the back of the indefensible ESL proposals, and an 'apology' from the Glazers which we do not accept, we need to give fans a meaningful share in the ownership of United and a meaningful voice in how it is run.

"The government now needs to act. That has to mean a process which results in fans having the opportunity to buy shares in their club - and, more to the point, no single private shareholder holding a majority ownership of our football clubs which allows them to abuse that ownership.

"The government needs to reflect the views of ordinary people who see that now is the time to reclaim the people's game."

What has been the fan reaction?

"It's been pandemonium," United Muppetiers podcaster Mike Parrott said at Old Trafford before the game was postponed.

"I don't think it's the right thing to do. On one side, that's how protests work in that you need to send a message, but it's also not great.

"Breaking cameras, breaking glass and rushing the stadium, all these terrible things are not what Manchester United fans want to be associated with.

"They shouldn't be doing it whatsoever. I don't think this conveys a message that they want the 50+1 fan ownership, which was the original idea. It hasn't really worked in my eyes."

Another fan protesting at Old Trafford told BBC Sport: "When they [the Glazers] came in 2005, the club wasn't in any debt; a few years later you're talking £400m in debt.

"You look at the stadium, it's a beautiful stadium but there is rust, it's falling apart and they just don't care at all, there's no communication with the fans.

"They said they would communicate with the fans but last week there was a supporters' community meeting, they didn't go.

"I think we are doing this in the best possible way." 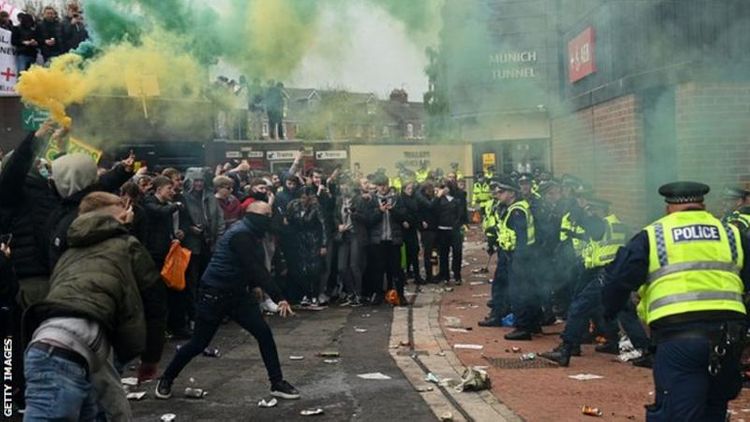 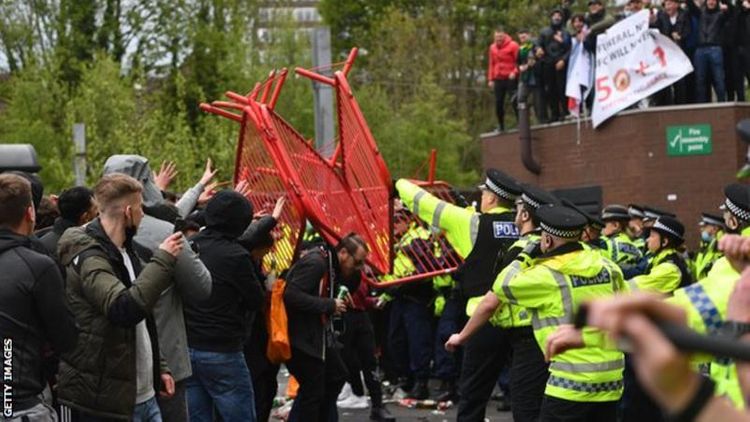